Black and White and Blue – Adult Cinema from the Victorian Age to the Dawn of the VCR was published by ECW Books in 2007. 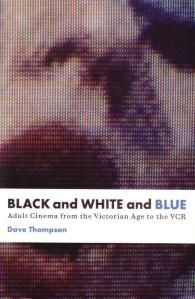 But Moreck treats stag films in just one disdainful chapter among many, an approach that was echoed by the French-language publications by Ado Kyrou and Lo Duca that followed in the late 1950s and early 1960s.  Neither is the English language any more forthcoming.  With the barely-deserved exception of a rash of exploitation paperbacks published in the late 1960s/early 1970s (The Stag Film Report, Girls Who Do Stag Movies, Stag Films ’69), just one book – Al Di Lauro and Gerald Rabkin’s Dirty Movies: An Illustrated History of the Stag Film, 1915-1970 – can claim to offer any kind of authoritative discussion of the field.

Prior to that, one needed locate a single issue of Playboy, from November 1967, to learn anything on the subject, and the bare facts laid out by part 17 of Arthur Knight and Hollis Alpert’s mammoth The History of Sex in Cinema remain largely the same today as they were back then.

With but a handful of exceptions from the late 1960s (by which time, the landscape had so shifted that stags themselves already seemed old-fashioned), the people who made these films left no footprints.  We do not know the names of the filmmakers nor, for the most part, of their stars or their distributors.  We do not know when or where the films were shot.  We cannot even say with any certainty precisely who they were made for.

Inevitably, urban legend has filled in many of those gaps.  Throughout the time I spent researching and writing this book, I lost count of the number of occasions upon which I was informed, in grandly disapproving tones, that my subject matter was synonymous with organized crime, a world in which hapless junkies, hookers and street people were coerced into acting out some other sicko’s most degenerate fantasies for the price of a fix and, maybe, one less black eye than usual.  And how did they know this?  “Oh, I read it somewhere.”

Which they very likely did.  Throughout the 1950s and early 1960s, an entire generation of pulp magazines grew up around a world of super-sensationalized “true life” adventures, with war, crime and sex at the top of the pile.  Stags were a natural component within this universe, a seamless combination of two of those talismans (all but two American states, Illinois and North Carolina, declared it illegal to even own a stag film until 1968), and a faithful stand-by for those months when the editors ran out of harrowing escapes from piranha-filled Nazi Death Cages and the like.  Plus, because nobody seemed to know who was making the films, nobody knew who wasn’t.

Enter the sadistic crime boss and his nymphomaniac moll, and a white slave trade that journeyed directly from the heart of Middle America, to a soiled mattress in a tenement slum.  There, evil-eyed mobsters lurked behind scorching lights, and the unblinking camera stared with pitiless evil, while syphilitic studs pounded their diseased seed into pure and innocent writhing flesh.  Etcetera.

In fact, beyond the speculations of such publications, there is no evidence – written or otherwise – to suggest that organized crime was even aware of stag films prior to, again, the late 1960s.  The case for coercion is harder to prove or disprove, although the evidence of one’s own eyes, watching the faces in the films, leads one to disagree with it, simply by turning one of the stag films’ most publicized and, in this instance, accurate faults – the actors’ absolute inability to act – on its head.

If they weren’t taking part of their own free will, and enjoying every minute of it, you would be able to read it in their eyes.  Every other emotion, from ecstasy to impatience, from shock to shyness, is lit up like a neon sign.  But one can count on two hands the number of films where fear, terror or dread can be registered.  And why is that?  Because stag films were made for stag audiences – loud and boisterous gatherings of predominantly (if not exclusively) male viewers, ordinary Joes who wanted to see ordinary people having ordinary sex.  No kinky stuff, no whips and chains, no kids, and no fear.

That promptly dismantles another popular misconception, that the stags subjected their stars to all manner of hideous sexual degradation.  In fact, the vast majority of movies… certainly American ones… shot before those watershed late 1960s were almost homely in their convention.

Sex was generally between two people – one male, one female.  Coitus was compulsory and oral sex was popular, but even here there were boundaries that make a mockery of the oft-heard complaint that women were the denigrated victims of a brutal male power trip.

Humor wasn’t simply rife among many of the actors, it was contagious.  A 1940s film, The Director, focuses on the making of a stag movie, under the aegis of an astonishingly flamboyant director.  Forever coaxing his cast to ever-greater lengths, he prances and cavorts across the screen, a display so hilarious that the woman is barely able to hold her co-star’s penis in her mouth, so heartily is she laughing.  Doubtless the audience (minus mouthfuls) reacted in a similar fashion.

This innocence is, of course, comparative.  A “dirty film” – that is, one that showed full penetration and orgasm – in 1916 would still be dirty in 2006, and the oldest stag film ever made could not be shown on network (or even cable) television today, no matter how tame it might seem when screened alongside the full length epics of the last few years.  In the world of erotic film, after all, it is not the content that has changed, but the presentation of that content.  The human body remains the same as it ever was, and those souls who advocate an end to all forms of explicit sexuality would be as offended by the contents of their great-grandfather’s generation’s sex films, as they are by the hottest new release.

Technical considerations notwithstanding, the stigma that surrounds stag films, then, is less a product of the films’ own environment, than it is a developing product of our own – one reason why these otherwise reviled little movies are, contrarily, much beloved by sociologists (and social historians – both street scenes and indoor sets capture a way of life that has long since vanished).  More than any other medium, it is said in such circles, the stag film allows the inquiring mind to chart the evolution of our own cultural attitudes not only towards sex, but also towards one another.

Such ruminations are not an integral component within this book, beyond acknowledging astonishment at how stags can still inflame opinions – more so, even, than modern erotic movies.  Wading through Internet discussions where such topics are raised, there is inevitably at least one thread discussing the genre’s demeaning opinion of women, and how such and such a film was designed solely to appeal to man’s baser instincts.  The problem with so much learned analysis of filmed erotica, however, is that there are as many opinions as there are sexual expressions, which tends to suggest that most writers are either reflecting their own preferences, or else attacking those that hang in stark opposition to theirs.

To cut away all the analysis and babble, let us agree that people enjoy looking at sex films for the same reason they enjoy looking at flowers or landscapes or cloud formations or precious stones.  Because they find them appealing, because they are attractive, because there is a beauty in what they are witnessing that cannot be found elsewhere.  And just as we do not analyze why people like to look at those other things, so there is no need to analyze why people like to look at pictures of other people having sex.

Yes, there is a degree of avarice involved, jealousy perhaps, longing maybe.  But do those same emotions not occur when one looks at an especially appealing museum exhibit?  Or when a painter sets out to portray a sunset (for what is art, after all, if not an attempt to capture that which is otherwise ephemeral or at least immovable?)  A man walking past a motor showroom and gazing at the luxury he can never afford is experiencing the same basic emotional (and, sometimes, physical) sensations as if he was watching a sex film.  The brain processes those sensations in a different manner, to be sure.  But if emotion could be bottled, the difference would be negligible.

Among the other topics that this book will not tackle are the ever-shifting definitions of “obscenity” and “pornography,” and the laws that governed those definitions; again beyond an observation that censorship is rarely applied in anything approaching the commonsense manner that the majority of people would wish it to be.  One needs only remember America Online’s attempt to clean up their service in 1996 by creating a filter that would reject any “obscene” combination of letters from the system.  Authors of spam e-mail got around this by adding a superfluous X or asterisk to the word in question.  Residents of the English city of Scunthorpe, however, did not have that option.

Besides, how can you censor a film in which all but the opening few minutes (and not always that) could not legally be shown uncensored in any conceivable public forum?  In 1977, the New York cable show Midnight Blue attempted to air portions of a stag film, The Personal Touch, which purportedly starred actress Barbra Streisand.  By the time the network’s owners had finished masking the “objectionable” scenes, the movie was condensed to a single thin strip of indefinable movement on an otherwise blank, black screen.

If one thing can be said for certain about stag films, then, it is that, under any reasonable interpretation of the law as it stands (and not as we wish it was, or think it ought to be), they were unequivocal in their refusal to brush even the gray areas with which other erotic art forms coquettishly flirted.  They were, by the standards of the day, shamelessly “obscene.”  They were, according to most popularly held definitions of the word, unerringly “pornographic” (or, at least, flagitious, the term preferred by 1920s policy-makers).  And, from the minute production began, until the moment the movie ended, they were one-hundred-per-cent illegal.  In every conceivable arena, where the law ended, the stags began.

In 1921, Indiana politician Will H Hays was selected to oversee the morality of the motion picture industry, heading up the newly founded Motion Picture Producers and Distributors of America Inc.  Effectively a heavily empowered watchdog, the Hays Office essentially spent its first eight or nine years studying both the movie industry, and its supposed (or potential) effect upon society at large, before drawing up a set of inviolable guidelines for the industry to follow.  The results of this process would define the output of American cinema for the next fifty years.

Excessive and lustful kissing, lustful embraces, suggestive postures and gestures, are not to be shown.

Complete nudity is never permitted.  This includes nudity in fact or in silhouette, or any lecherous or licentious notice thereof by any other character in the picture.

No picture shall be produced which will lower the moral standards of those who see it.

White slavery shall not be treated.

And so forth.   A similar code for the stag makers would have reversed those prohibitions altogether.  Excessive and lustful kissing must be shown.  Complete nudity is always permitted.  Every picture should lower the viewer’s moral standards.  And white slavery is fine, especially if you can’t think of anything else.

One thought on “Black & White & Blue”