On February 23, 1963, the Beatles were in the English midlands town of Mansfield, cowering in their dressing room while the Granada Theatre fell under a state of siege.  There were girls screaming everywhere and, glancing around at one local musician, sat backstage with the bands having made his own way in over the roof behind the chip shop(!), Paul McCartney happened to mention they were starving.

“So I went back home,” the visitor remembers, “over the roof again, and through the chip shop, and told my mother all about it.  She made them up a picnic basket full of food – containers of hot soup and piles of salmon sandwiches, which I took to them backstage, again going over the roof.  And they were absolutely knocked out.”

They certainly were.  Indeed, a full decade later, Paul McCartney would still remember the struggling young singer and his impromptu act of famine-relief; he remembered this good Samaritan’s name; and he might even have remembered his story.  Because it really wasn’t the sort of tale which one forgot in a hurry.

Johnny Theakstone was the forgotten man of early British rock’n’roll.  Many others vie for the title, but none of them even come close.  Dead before his 17th birthday; unknown and therefore, publicly unmourned; Theakstone nevertheless would live on when his group, Shane Fenton and the Fentones, persuaded roadie Bernard Jewry to slip into the title role to help them through a crisis… and then he died again, when Fenton’s own star slipped into obscurity, and the singer reinvented himself as glam rocker Alvin Stardust.

Lining up as Theakstone (vocals), Gerry Wilcox (guitar), Mick Hay (rhythm guitar), future Hollies drummer Bobby Elliott and a bassist remembered only as Bonny, it was late in 1960 when Johnny Theakstone and the Tremoloes recorded an audition tape for the BBC late in 1960.  The Corporation was constantly on the look-out for new acts to guest on the weekly Saturday Club show and, though the chances of being accepted were staggeringly slight, Theakstone was  convinced his Tremoloes were equipped with virtually everything it took to succeed – except for a name.

Adopting “Shane” from the writing credits of a recent Gene Vincent single, and “Fenton” from a garage he passed on the way home from a gig, the newly named Shane Fenton and the Fentones dropped their precious tape in the post, and waited.  They were still awaiting a reply when Theakstone died.  As a child, Theakstone had suffered a prolonged bout of rheumatic fever, an illness which so weakened his heart, roadie Jewry mourned, “that he should never have been doing the sort of things he was doing with the group.  He was going out to work during the day, and then in the evening he’d go off to do a gig and sometimes not return home again until 4 in the morning.  But no-one ever stopped him because that was the life he loved.”

The first sign that anything was wrong came when Jewry dropped by Theakstone’s house one evening, to pick him up for a show.  “I found him sitting on the settee in the lounge, with blankets wrapped all around him, very ill and too weak to stand.”  Jewry stood in for him on stage that evening and, when Theakstone was admitted to hospital, he continued to deputize.

“And then one day there was a knock at the door and it was Cliff Hardy, who was the local Musicians Union branch secretary.  ‘Johnny died last night.'”

The effect on the group was shattering. “We thought the best thing to do would be to fold it up out of respect for Johnny’s mum.  And then… about a month after Johnny’s death… a letter arrived from the BBC saying they liked the tape we sent them, and were now offering us a studio test. 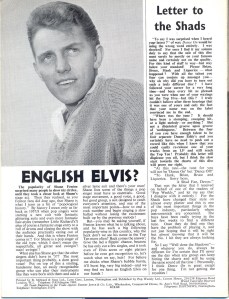 “Johnny’s mum came round to see us and said she’d been turning it over in her mind, and didn’t want us to give up now, just as the BBC had shown interest.  ‘I’d like you to carry on.  It was Johnny’s life.  He would have wanted you to do that.’  So we got the group together again, and then she came to see us again and said, ‘would you be offended if I asked you to use Johnny’s name?”

The newly reconstituted Shane Fenton and the Fentones sailed through the audition, early in 1961, and duly appeared on Saturday Club.  Before the end of the day, the show’s M.D., Tommy Sanderson, had become the Fentones’ manager; by the end of the week, he had landed them a deal with EMI.

September, 1961, saw Shane Fenton and the Fentones release their debut single, the stirring “I’m A Moody Guy,” backed by the old music hall favorite “Five Foot Two, Eyes Of Blue.”  Days later, on October 3, the band received its media launch, at the Center of Sound in central London.  They made their television debut on Thank Your Lucky Stars, and the record, as Jewry put it later, “…was away.”  It eventually peaked at #19 on the British chart, and nobody doubted that a new star had been born – nobody, that is, apart from the record buying public.  They were never convinced by this latest beat sensation, and the more they saw of them, it seemed, the less certain they were.

Through early 1962, Shane Fenton and the Fentones slugged around the UK, aboard one of the legendary Larry Parnes’ package tours, sharing the bill with Billy Fury and the Tornadoes, Karl Denver and Peter Jay.  But though their live show went over well, three successive singles passed by unnoticed: “Walk Away” and an early cover of “It’s All Over Now” for the full group, and the instrumental “Lover’s Guitar” by the Fentones alone.   June brought a respite within this gathering gloom, when the still memorable “Cindy’s Birthday” returned the band to the upper echelons of the chart.  But then it was back to square one as “Too Young For Sad Memories” and “I Ain’t Got Nobody” sunk successively into oblivion, to be joined by another of the Fentones’ instrumental efforts, “The Breeze And I.”

“One moment our career was taking shape, and we were going steadily upwards,” Jewry would recall.  “And then within a matter of weeks, it was all over.  We just couldn’t get work.  Promoters only wanted to book you if you came from Liverpool, and they could plaster this all over their posters.”  It didn’t even matter that the Fentones, during their few weeks of glory (actually it was months of glory, but it seemed a lot less), had played all the future hotbeds of  Merseybeat, “and knew what the music was all about.”  They had, quite simply, happened too soon.  “Our timing was wrong.”

That fact was brought home to them when the Beatles played Mansfield, and Jewry rushed home to get them some food.  That night, he experienced what it was like to be at the top of the game.  The following month, however, Shane and his Fentones were reminded of what it was like at the bottom, when they set off on another Parnes package, way down the bill behind Joe Meek’s Tornadoes, Rolf Harris and Joe Brown.

It was the last thing they would ever do.  In April, 1963, Shane Fenton and the Fentones broke up, and Jewry headed off to a solo career which was no more rewarding than his band act.  “A Fool’s Paradise,” a wryly ironic title for a man who still dreamed of stardom, flopped that same month; “Don’t Do That” went belly-up in July.  The only bright spot on the horizon was when he met Iris Caldwell, the Liverpudlian ballet dancer who would become his wife, and who had her own tale of Merseybeat-derived woe to tell – her brother was Rory Storm, the man who could, and maybe should, have beaten the Beatles to the top.

For a time, Jewry moved into management, linking with Tommy Sanderson to oversee Bobby Elliott’s new band, the Hollies.  But the following year he was performing again, as the husband and wife duo “Shane Fenton and Iris” took their song-and-dance routine through the cabaret clubs of northern England.  And when 1972 brought Jewry a brand new record deal, he’d been Shane Fenton for so many years he didn’t even dream of finding another name to play with.

His manager, Hal Carter, however, did, and a year or so later, as the singer’s new single, “My Coo Ca Choo,” awaited its release, he unveiled the new alias.  Shane Fenton, Carter argued, was yesterday’s papers and, as the newly  christened Alvin Stardust took his first steps back on stage, Jewry literally reveled in the mysterious new identity he and Carter had created.

A star with no past, a man with no reputation, a leather clad, black gloved demon who stalked British pop television and refused to smile or even answer questions.  It was true, Stardust chuckled, as he prepared for another sinisterly appareled television performance, the BBC’s immortal Top Of The Pops, nobody had an inkling who he was – or ever had been.   And then another of the show’s guests walked by.  Former Beatle Paul McCartney glanced over at Alvin, then paused for a moment, knowing he’d seen that face somewhere, but not quite able to pinpoint where.

Then he burst into a sudden grin, and raised his voice over the buzz of the crowd.  “Hey, Bernie!  Is your mum bringing down the hot soup and salmon sandwiches tonight?”

9 thoughts on “HIS MA MADE SARNIES FOR THE MOPTOPS”